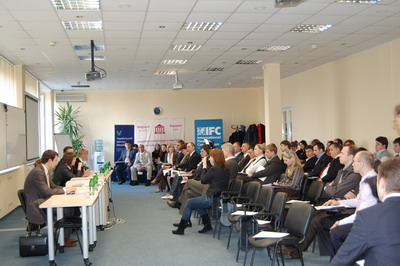 On April 3, 2009, in Kiev, the European Arbitration Chamber was initiator and co-organizer of the round table discussion  on the subject of : International arbitration, mediation and treteyskiys (arbitration) courts : outlooks and problems of development.

Partners and co-organizers of this event were Ukrainian Center of Mediation, Kyiv Mohyla Business School, the International Financial Corporation and  Treteyskaya Palata of Ukraine.

This event is one of a series of educational and informational initiatives of the European Arbitration Chamber in Ukraine. The next event on the subject of international arbitration will be held by the European Arbitration Chamber on May, 21, 2009. This First International Arbitration Forum, which takes place on May, 21, is carried out with the participation of representatives of UNCTAD and UNCITRAL, as well as with the participation of lawyers and arbitrators from France, Belgium, Poland, Germany, Switzerland, countries of CIS, etc.