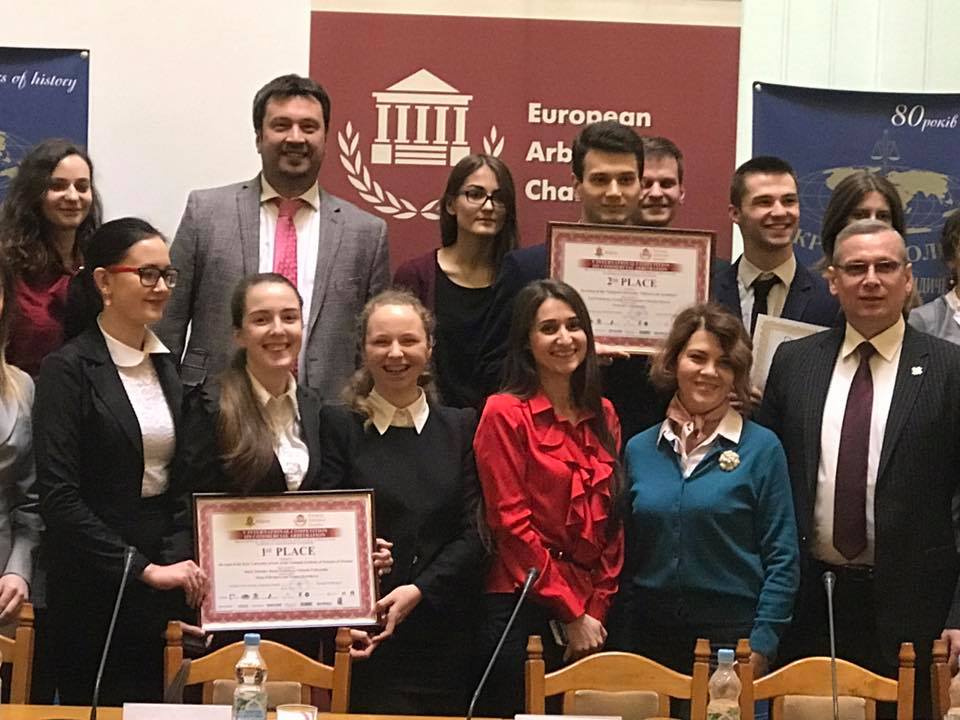 On March 23, 2018  the Final and the solemn ceremony of awarding the participants of the V International Competition on Commercial Arbitration  was held. The organizer of the moot court competition is the European Arbitration Chamber (Brussels, Belgium).

In the final round of the contest the teams of the Kyiv University of Law of the National Academy of Sciences of Ukraine, the Kiev National Trade and Economic University and the National University "Odessa Law Academy" competed for the championship.

The participants presented their arbitration awards in an improvised dispute, which was considered at the International Commercial Arbitration Court under the European Arbitration Chamber.

The event was held with the participation of EAC President Hennadii Pampukha, the founder of the International Women's Expert-Legal Union Olha Pampukha, the EAC Executive Secretary Catherine Avramova.

A specially invited guest - a Ukrainian politician, a member of the Permanent Delegation of the Verkhovna Rada of Ukraine to the Parliamentary Assembly of the Council of Europe Anatoly Rakhansky welcomed the participants of the event.

Judges and honorary guests of the competition emphasized the importance and urgency of this educational project for students, and also noted an interesting contest task.

The jury were pleasantly surprised by the level of preparation and oratorical abilities of the teams, but nevertheless they expressed certain remarks, instructions and wishes to future young specialists.

The team of the Kyiv University of Law of the National Academy of Sciences, consisting of Victoria Poltoratskaya, Daria Malenko, Daria Tretyakova and coaches Elena Polivanova and Tamara Kortukova, won the highest score.

The second place was taken by the team of the Odessa Law Academy, consisting of Georgy Kravtsunenko, Yuri Podchenko, Music Solomii and coach Vyacheslav Lubashenko.

The main prize - internship at the European Arbitration Chamber in Brussels and its partner AIA Belgium - was presented to Vadym Yudovych, a student of the National Ostroh Academy, whose competitive essay in the individual competition was the best.

The European Arbitration Chamber and the Organizing Committee of the Competition congratulate the winners and all participants of the V International Competition on Commercial Arbitration! There are no defeated, because only the best have competed!